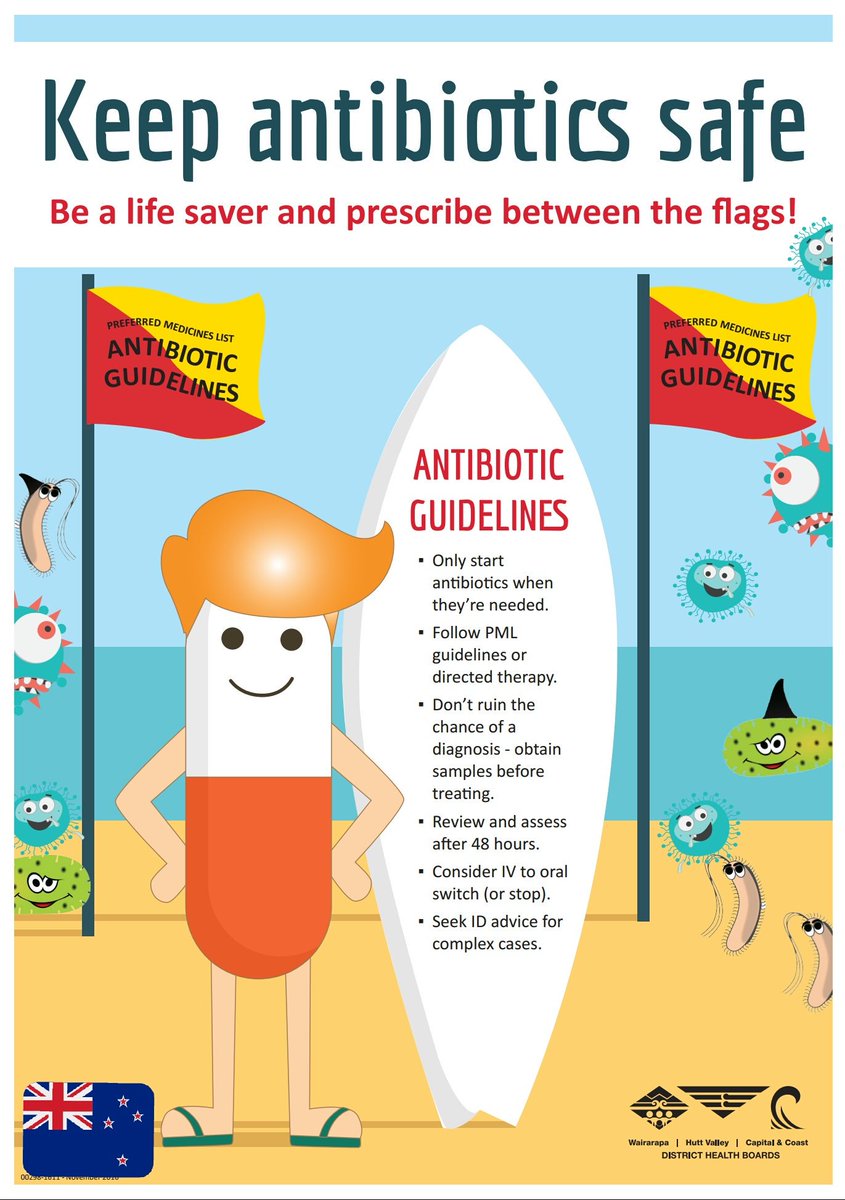 Antimicrobial resistance presents a major challenge, but simple steps can to minimise the impact. Social media has a role in disseminating information during antibiotic awareness campaigns: information can be shared rapidly, widely, and cheaply.

However, numerous other hashtags were used quite widely during the week, including hashtags for established professional-focused national campaigns such as #AntibioticGuardian, which originated in the United Kingdom (UK), and an unofficial hashtag that reflected the purpose of the week – #AntibioticAwarenessWeek. There was also some tweeting without hashtags. There were many tens of thousands of tweets posted during the campaign week by tens of thousands of individuals and organisations.

It would not be possible to analyse this volume of tweeting using conventional methods. Accordingly, we extracted data using social network analysis (NodeXL) and Twitter searches to study the characteristics of tweeters and tweets using the most frequently used hashtags (official and unofficial) and without hashtags. An example NodeXL map is shown in Figure 1.

The quality of the most popular tweets was assessed by looking at use of hashtag, image or mention of another tweeter. These are components that boost the impact of a tweet as described in the previous ScotPublicHealth blog post.

The aim of the analysis was to identify whether there were differences in tweet content between the hashtags, to see if there is value in looking beyond the official hashtag, both for learning, networking and broadcasting.

The data and method are described in the Storify summaries presented below. The number of tweets included in the analysis is shown in Table 1. 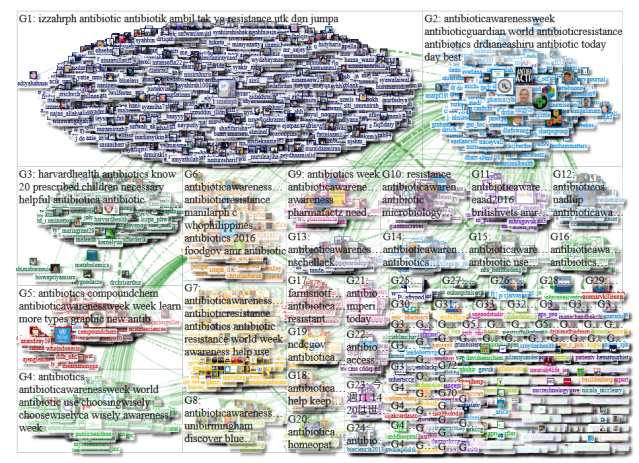 The characteristics of the tweets and tweeters for the 40 most shared tweets for each hashtag are shown in Table 2. The majority of these top tweets, across the different hashtags, included an image. Official campaign graphics dominated #AntibioticResistance tweets while bespoke graphics generated by individuals were more commonly used for the tweets using the unofficial #AntibioticAwarenessWeek hashtag. Use of a web link was more variable, and inspection of the top tweets from the summaries of the different hashtags reveals different types of information: eg WHO tweets typically linked to campaign websites, while tweets using unofficial hashtags linked to a wider range of sites including blogs, news stories and short videos.

Click on the links below to view the Storify summaries of top tweets for each hashtag including images and number of retweets, likes and replies; click individual tweets to view on Twitter.

Tweets without a hashtag

Very few posts linked specifically to peer reviewed studies from journals (n=2 studies in total, both in the tweets without hashtags). The official campaign hashtags for the global and European campaigns had more top tweets from organisations rather than individuals. The international organisations dominating the #AntibioticResistance tweets have huge numbers of followers on social media, polished campaign materials, and used the official hashtag; unsurprisingly these tweets had by far the largest number of retweets. Tweets that did not use a hashtag were much less likely to be retweeted.

Five European languages were represented in the top 40 tweets using the official European campaign hashtag. A similar diversity was seen in the tweets using the #AntibioticAwarenessWeek hashtag, but with the spread of languages extending from Japan to Spain, though English remained the most prominent language. There was some overlap in materials for different hashtags. Official campaign materials featured in some of the tweets using unofficial hashtags. A small number of top tweets using the official #AntibioticResistance hashtag used individually produced graphics. Some tweeters posted across the different hashtags, including a particularly popular series of posts by a Kuala Lumpur based registered pharmacist tweeting under the username “@izzahrph”.

Table 3 shows top 10 tweeters for each of the hashtags studied, ranked by “betweenness centrality” which is a measure of control over information flow in social network analysis. The top influencers are different for the various hashtags studied. Health organisations dominate the official global and European hashtags, with the individuals in the top influencers of #AntibioticResistance and #EAAD2016 for the period shown holding senior roles within UK government departments. One of these tweeters – Dr Diane Ashiru (lead pharmacist for antimicrobial resistance at Public Health England) – was the only individual identified as a top 10 influencer for three of the hashtags. The figures for the #AntibioticResistance hashtag in Table 3 are for a single day; while the large global organisations remained prominent throughout the campaign, there was some flux for individuals and smaller organisations on a day to day basis, including a small number of individuals from across the world. Tweets using #AntibioticGuardian were mainly from UK-based organisations, networks and individuals, though the hashtag is increasingly used in countries across the world.

We have documented the huge volume of tweeting and interactions during the campaign week. The archive of tweets documenting this analysis, collected in the Storify summaries (links above), provides further data and results for evaluation and development of more targeted and effective future campaigns. Nonetheless, this analysis only captured Twitter activity and only a minority of people use Twitter (21% of respondents in one US survey). The study has largely identified English language tweets, with some prominent exceptions, and it is possible that there was other high profile Twitter activity in other languages, using language specific hashtags, that has not been captured in this analysis.

Regardless of the careful planning behind international awareness campaigns, social media activity develops in sometimes unexpected directions, both with emerging hashtags and tweets without hashtags. Evaluation of a social media campaign should consider all relevant activity, keeping initial search terms broad, and adapting search strategies over time. Though #AntibioticAwarenessWeek was not the official campaign hashtag, it disseminated official and bespoke information and, used by scientists and clinicians across the world (eg microbiologists, infectious disease specialists, pharmacists), it led to extensive connections. This is a community that is already well engaged on Twitter as illustrated by the high quality of tweeting at infectious disease conferences.

Interactions around tweets using the #AntibioticAwarenessWeek and #AntibioticResistance hashtags have led to ongoing professional relationships across the world, including the collaboration on this blog which brings together expertise from UK and New Zealand in pharmacy, social media campaigns (including one of the top bespoke graphics of the 2016 campaign for both the #AntibioticResistance and #AntibioticAwarenessWeek hashtags – figure 2), and use of social network analysis to study these campaigns.

The analysis identifies the extensive use of official and unofficial hashtags during the campaign week, and the different influencers and content. The additional content and diversity in tweets using the “unofficial” hashtags, including #AntibioticAwarenessWeek, makes it worthwhile to include these tweets in an evaluation of the campaign week.

A fuller write up of this work has been prepared for submission to a peer reviewed medical journal, to update with findings from the 2017 campaign.

3 thoughts on “What’s in a hashtag? An analysis of tweets posted during World Antibiotic Awareness Week 14-20 November 2016”

My Tweets
Join 114 other followers