From time to time I am asked to explain Public Health to students, colleagues from other disciplines or a more general audience. A traditional approach might be to structure such a session around the three domains of Public Health (health improvement, health protection, quality improvement), building on specific examples:

However, this approach perhaps doesn’t highlight the distinction between individual and population health clearly enough for a general audience. After all, one response to the final example above is to talk about uptake of smoking cessation services and other individual approaches to health. A GP may respond that Maslow’s hierarchy applies to an individual as well as a population – a patient is unlikely to be receptive to ideas about health screening or treatment if they are hungry or worried about their home or job.

As I prepare for a session teaching 4th year medical students this week I am keen to try something different, though informed by these and other key Public Health topics. The focus here is on highlighting the differences between approaches to improve individual and population health.

There is a lot of interest to Public Health in the scientific and general press at the moment. For example, over the last few weeks there have been major studies/ stories about the following topics in the world’s top medical journals:

We can learn from commentary around these stubbornly persistent threats to health: eg this individual reflection on diesel fumes and health in the Guardian. Individual response and action is important, and there is clearly a role for behaviour change and medical treatment, but measures to reduce the impact of these global threats to human health will take work at all levels, from individual to supranational and global approaches. In a period of political and economic uncertainty Public Health tools at regional, national and international level (tax, cost, regulation, legislation) are being discussed again, around topics that would have been as familiar Hogarth as to our Public Health predecessors in the Victorian era and first half of the 20th century.

Public Health’s influence comes in cycles: it is perhaps no surprise that there is discussion around regulation, legislation and evidence in response to a US President supportive of anti-vaxxers and climate change deniers and Brexit negotiations threatening supranational cooperation and legislation (eg see news story on European Medicines Agency in London).

We already know the big non-communicable disease threats to health. The question becomes less “what do we know?” and more “what can be done?” to improve population health. It is all too easy to say that we do our bit as individual professionals (eg by cycling rather than taking the car to work), or to focus specifically on individual patients in our work (eg in working out how to reduce obstacles to care, or promote uptake of evidence based approaches). These are tangible, achievable steps, reinforced by the endorphins from the ride, the surge of serotonin in achieving another goal, the satisfaction of another person helped. It is much more difficult to achieve whole system successes, overcome legislative hurdles, navigate uncertainties or limitations in evidence at population level (vs traditional randomised controlled trials). Nonetheless, we can learn from our own experiences, and those of others, in identifying areas for improvement and obstacles to change at a population level.

(Image: Obstacles to cycling in south east Edinburgh, plus contrast between built and natural environment, taken on morning of 14 April 2017).

The tools that we can deploy in planning and influencing change at a population level are among the first to be taught to Public Health specialists during their training, but it is worth revisiting and reflecting on lessons learnt in the intervening period. I have added in one framework that will be less familiar.

The three domains of Public Health 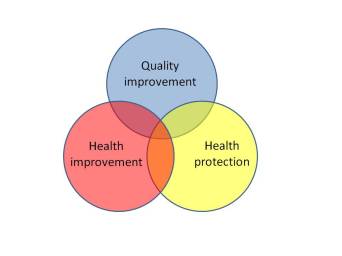 (*This domain is more traditionally referred to as “health and care service improvement”, but I would argue that this potentially limits the scope of Public Health work.) The three domain model used to be described in full on the FPH website. I don’t think that’s available anymore, but there is a good description by John Middleton here.

Bringing the three domains together (the Reuleaux triangle at the centre of the domains), the most commonly cited examples are screening and immunisation: both require a whole system approach; both require continued monitoring, testing and adaptation over time. However, they are rather clinically focused for a more general discussion;  topics such as water and air quality could also sit in this central position by taking a slightly wider approach to the third domain. 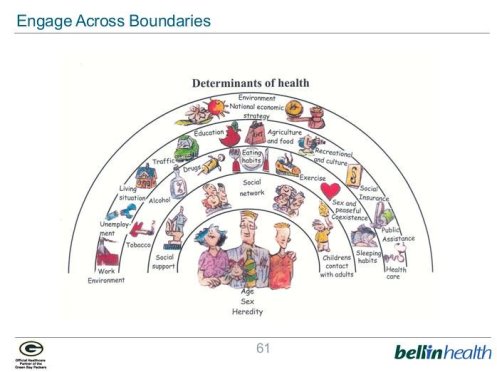 The main influences on health across a life time are not health service based.

In their widest sense the three domains of Public Health described above require us to think across the levels from individual biology to national economic and environmental factors. While a piece of work focusing on increasing uptake of a maternity benefit may start with a small number of pregnant women, the ultimate aim would be to reduce maternal poverty more generally, bringing our learning to the design and implementation of the benefits and tax credit system.

Though not usually taught as a Public Health topic, the Edwards Deming’s Lens (or system) of Profound Knowledge, well known through Quality Improvement work, provides a useful reminder for the balance of approaches required for success.

These four overlapping areas remind us to look for unnecessary variation (in process or outcome), to build knowledge through testing (rather than just description), to consider human factors (which may relate to patient, clinician, elected member or any other relationship), all the time thinking of the overall system (whether a clinic, ward, or wider economy).

Thinking about smoking and lung cancer, the period between Doll and Bradford Hill’s first observational studies (published 1950 and 1954) and the smoking bans in public places (2006) and in cars with children (2016) reminds us quite how complex and time consuming Public Health progress can be.

We can apply this learning to current risks to health such air pollution (which was in fact a concern of Doll and Bradford Hill back in 1950). With 4.2 million deaths globally in 2015, this is as much of a Public Health crisis as any communicable disease pandemic. As for smoking:

We therefore need to learn from previous Public Health successes, but navigate a faster resolution this time around. Social media provides opportunities, but commercial and political interests have experience and large audiences on these new platforms. Big data and massively expanded computing power should provide more sophisticated analysis than ever before (eg street level data informs Demings “understanding variation”), but the studies will still be observational in design, with the same limitations (biases and confounding factors) as the smoking studies.

See also: advocacy toolkit and a 2 minute film on using the lens of profound knowledge to increase uptake of maternal benefits

Geoffrey Rose is perhaps most famous for his bell shaped curves and the “prevention paradox” (a preventive measure which brings much benefit to the population offers little to each participating individual).

Universal approaches that have been suggested in response to Rose’s work include:

Self regulation by major commerical interests (eg “Responsibility Deal” promoted by UK coalition government of 2010)  has not been shown to be effective for promoting healthy choices around food and alcohol. Universal approaches require cost, tax, regulation and/or legislation to be successful.

Inequalities (both health and income) are a central focus of Public Health work, but are arguably the most resistant to change of all measures.

Michael Marmot’s report Fair Society Healthy Lives (2010) provides a comprehensive summary of health inequalities and actions to tackle them. Concepts introduced in the report, such as “proportionate universalism” and “lifestyle drift”, are central to a Public Health response.

Proportionate universalism is defined as “the resourcing and delivering of universal services at a scale and intensity proportionate to the degree of need”, acting to reduce both the gap between richest and poorest, and across the social gradient.

Lifestyle drift is defined as “the tendency for policy to start off recognizing the need for action on upstream social determinants of health inequalities only to drift downstream to focus largely on individual lifestyle factors”.

It is this last point which is perhaps the most useful single measure of whether we are taking a population approach: examples abound of lifestyle drift in UK policy making – eg this story about covering buggies because of air pollution in London. Obesity strategy is another example, where committees start with discussions about town planning, promoting active travel and reformulating foods, but end up setting targets around completed weight management interventions instead. Public Health work, and actions to reduce inequalities, are difficult.

In conclusion, this blog has introduced some Public Health tools which will help frame issues from a population health perspective. The following matrix adapts the Dahlgren and Whitehead determinants of health model to consider interests, influence, evidence, cost and newsworthiness of actions around population health. Take a Public Health topic of interest and use the matrix to formulate your ideas. Post reflections in the comments box below.

(Featured image was taken in Leith, near Edinburgh, on morning of 17 April 2017).

4 thoughts on “What is public health? Some reflections for teaching”