It’s good to experiment. The idea of #ScotPublicHealth and a #PublicHealthHour emerged out of discussions during December 2015.

Our first #PublicHealthHour on social media has been scheduled for the first full working day of 2016 (6.1.16). Information has been circulated on Twitter, and in the real world through Public Health teams. Some of the information shared is shown at the end of this post.

It remains to be seen whether colleagues will be able to access Twitter at work, and how many will engage. What is clear, however, is that social media is increasingly important for professionals, patients and the public. Eric Levi, ENT surgeon, puts it well in two blog posts – one on a “social media epidemic” among patients, the other on a medical college slow to respond to a wave of criticism over the festive period. During 2016 we’ll use #ScotPublicHealth to work out how best to engage with all audiences using social media. If you can’t take part in the Twitter hour then you can complete a survey instead.

Our questions are structured around these objectives. They’re listed below as tweets scheduled for noon, 5.1.16 (a day ahead of Twitter hour). I have provided abbreviated examples within the first few tweets. Participants will have more characters to play with, as don’t need to repeat question.

Make sure that your Twitter profile says what you do (eg academic or service public health, statutory or voluntary sector etc). Put #ScotPublicHealth in your profile too and you will turn up in Twitter searches using the hashtag. Read responses to the questions and interact with colleagues with shared interests by responding, following, retweeting and/or liking their posts. See more in slides at end of this blog.

Q2A What topics do you want to discuss on #socmed in 2016? Use #ScotPublicHealth & #Topics eg #scotpublichealth #topics childhood obesity

How to use social media for #ScotPublicHealth 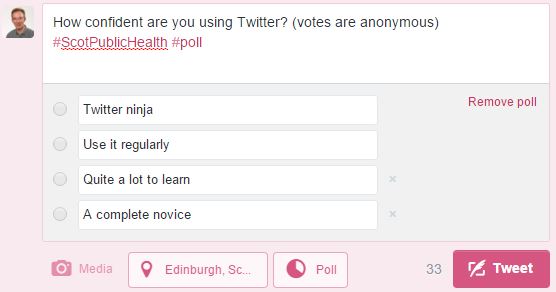 Thank you very much, and look forward to the conversation throughout 2016.

Here’s how I shared information about the Twitter Hour on social media, from a series of tweets on 22 December 2015 (slide 5 is adapted following feedback from Mark Outhwaite). 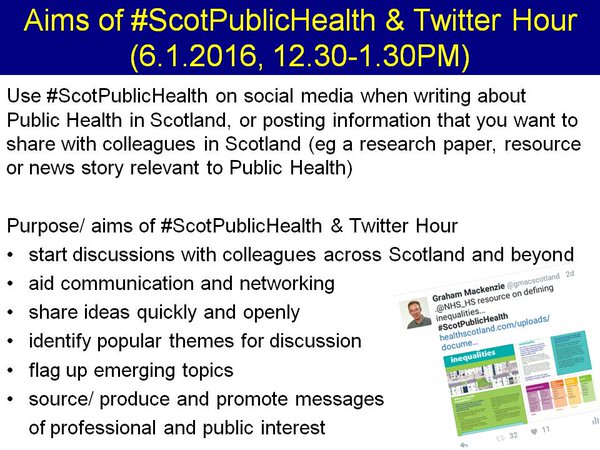 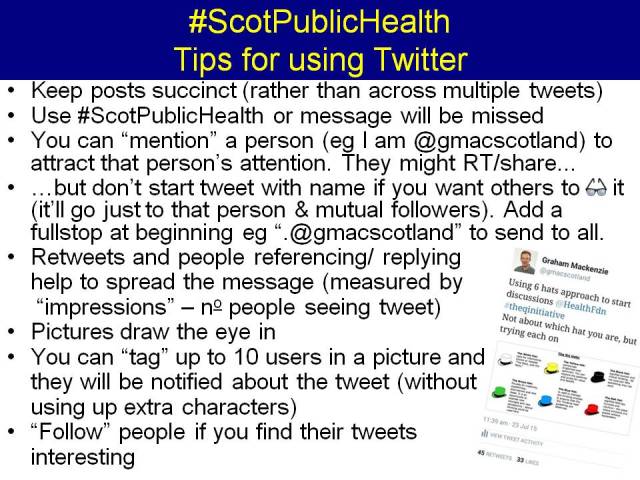