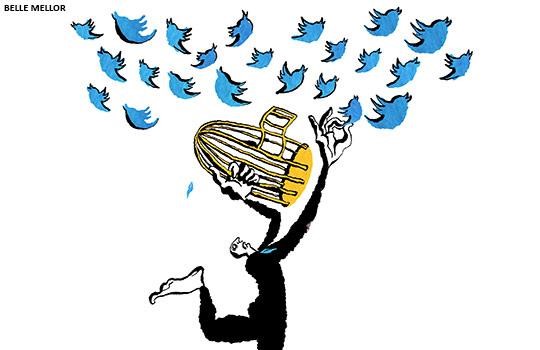 The BMJ cover story on 9 September 2017 described the response to a Twitter ban at a large conference in the US. Was this a lot of witter, a social media storm in a teacup; or did it represent censorship and a missed opportunity to learn at a conference?

(Prefer this blog as a PDF? Download it here) 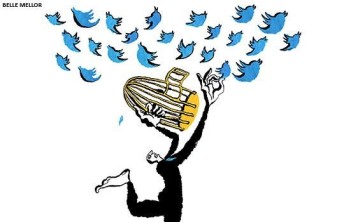 I started using Twitter in 2013 when “early adopters” were evangelising about its potential. I learnt by observing others and started tweeting. Following people with shared interests led to connections and further learning. However, the idea of scrolling through lots of tweets on a small device has never appealed very much.

Twitter provides a glimpse of clinical and scientific developments, often well ahead of print. Colleagues share ideas in accessible ways (eg infographics, short films, or blogs). However, the volume of information quickly becomes overwhelming. Big names across clinical specialties are on Twitter. Click from person to person, through hashtags, follow Twitter recommendations and you’ve lost an hour without much to show for it. You need a strategy to use Twitter effectively.

Conferences are a great way to start using Twitter in a more structured way. Delegates and conference organisers often start tweeting using the conference hashtag a few days in advance. You will arrive at the conference prepared, with ideas of work to search out and people to meet. However, after the conference has finished you need to have a plan about how to stay in touch and informed.

As a Public Health doctor I am interested in the big picture. The first time that I saw a social network analysis (SNA) map (of a conference via Mark Outhwaite, July 2015), I was hooked. These maps show interactions around a Twitter search term. It took me over a year to try my own maps, and another few months to understand the potential of these mystifying and beguiling green spaghetti junctions. 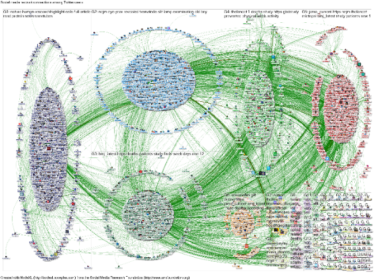 In October 2016 I started to use SNA tool NodeXL to work through a series of topics, including conferences and health campaigns. Automated reports provide summaries including top influencers, hashtags and weblinks from tweets. However, richer information is available from the individual tweets captured by NodeXL. Sifting through tens of thousands of tweets takes a few minutes using approaches I have refined over recent months. I identify the most shared posts as a rapid means of “digital curation”: if something has been shared a lot it is either popular or controversial, so there will be something to learn. This approach gives a contemporary glimpse into the response of professionals, patients and/or public. You can access the resulting “big data” summaries even if you don’t tweet: e.g. see my summary of BMJ/ IHI International Forum on Quality and Safety in Healthcare #Quality2017.

The approaches have wider application. Studying Immunization Week 24-31 April 2017 (hashtag: #VaccinesWork which is used year-round) I was interested – and concerned – that one of the tweeters with the biggest potential audience (number of followers multiplied by number of tweets(*)) was an anti-vaccination campaigner. Some weeks his tweets had a larger potential audience than large global campaigning organisations such as the World Health Organisation and UNICEF. I used SNA to study his connections. The anti-vaccination campaigner might have had a lot of followers, and a lot of potential views, but his tweets were hardly connecting. He was howling into the void. In comparison, the global organisations, and many individual vaccine advocates, achieved a much larger number of connections with accessible, clear and evidence-based materials explaining the benefits of vaccination for a general audience. The full analysis is available on my blog.

(*) Go to “get analytics” at bottom of Symplur page and set dates you want to study. 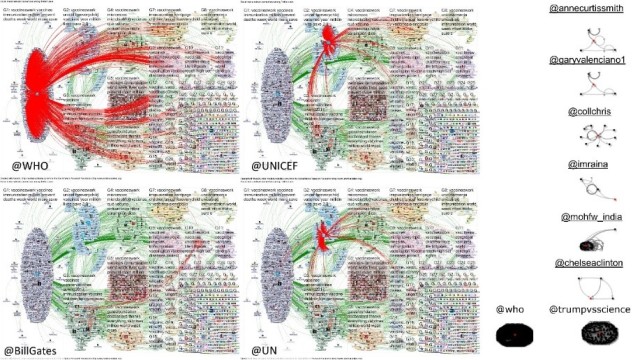 In addition to searching for hashtags it is also possible to use NodeXL to study people, organisations, weblinks and words and phrases on Twitter. This approach can be deployed to look at specific questions – for example to study the considerable social media impact of the BMJ cover story on the conference Twitter ban. The method is also useful in keeping up to date with top medical journals more generally. A recent search (19-26 September 2017) identifies top content from almost 23,000 tweets by over 13,000 tweeters. The resulting top 50 summary includes videos of clinical examination (including an ocular trematode featured in NEJM), clinicians’ responses to journal articles and tightly worded summaries, with weblinks to clinical and academic content from across these journals.

Julio Mayol, an early adopter of Twitter in his work as Professor of Surgery, writes about Twitter and surgical research in the December 2017 issue of BJS, but his points refer equally to surgery and clinical work more generally (see list below). The issue’s front cover features one of my NodeXL maps, after being approached by the journal’s social media champion, surgeon Richard Brady on 15 October, after an initial suggestion from Jonothan Earnshaw.  As captured in a subsequent NodeXL map, BJS and Julio’s tweets about the article and journal issue feature prominently in tweets by and about surgical journals in November. Indeed 11 tweeters in that more recent NodeXL map achieve 85% of the retweets on that map (out of 146 tweeters). The speed of publication, and the journal’s interest in social media, social networks, and infographics, is impressive, and is amplified by the work of individual surgeons like Julio and Richard. 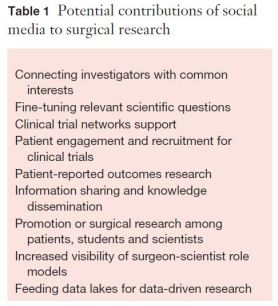 Twitter therefore has huge potential for healthcare workers for CPD and networking, and to study their impact if active on Twitter. However, you don’t even need to be on Twitter to access this content. The approach to digital curation described here can provide an up-to-date view of the medical and scientific world, driven by and feeding an endless curiosity and desire to learn. To see this work moving from niche interest/ hobby to the front cover of two global publications (BMJ and BJS) over a period of 3 months is exciting, and the interest looks set to continue with a paper on my work on conference tweeting in press for January 2018. Meanwhile, I have stopped actively tweeting, concentrating instead on finishing my studies of health and healthcare tweeting without influencing the topics that I am studying. 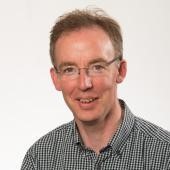 Links: My further outputs from NodeXL analyses are available at my ScotPublicHealth blog and Storify page, and these are updated regularly.

I have no conflicts of interest to declare. This work has not been funded externally. I would like to thank Marc Smith and his colleagues at SMRF for their help in getting NodeXL set up on my computer and their ongoing input in refining and developing their software and helping me improve my analyses.

Thanks to Julio Mayol for his kind words about this blog: 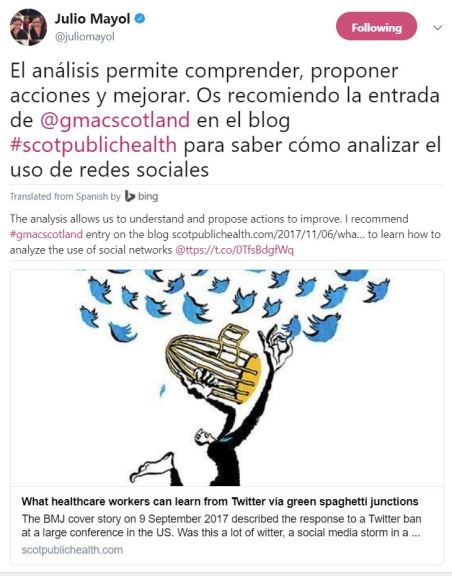